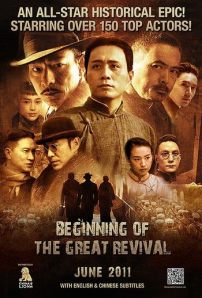 The summer is a time for Hollywood blockbuster movies to drive audiences to the theaters all over the world, and the new Transformers movie is no exception.  It recently broke the record for July 4th tickets sales in the U.S. and it’s been smashing records in many of the 110 countries around the world it’s showing in.  It has already made almost half a billion dollars worldwide.  However, according to CNN reports by Fareed Zakaria, it is not being shown in China, because Beijing has imposed a moratorium on new foreign films in order to encourage the Chinese people to watch a state-sponsored propaganda movie called, The Beginning of the Great Revival.  The film is being released this year to coincide with the 90th anniversary of the Chinese Communist Party. It describes the party’s influence as having led China down a glorious path of ethnic independence, liberation, national wealth and strength.  However, it conveniently left out any mention of the Great Leap Forward, the famine, the Cultural Revolution, Tiananmen Square, or the cultural genocide of the Tibetan people from 1951 to the present.  The Chinese Communist Party has made sure that this movie will be seen by its people.  The movie is being shown in more than 6,000 theaters accompanied with massive publicity.  This obvious grand scale attempt to temporarily mute the outside world while it brainwashes its people to be patriotic is very disturbing to the say the least.  I have little doubt that Transformers will be shown in China at some point, but that’s not my point…  The Chinese government will stop at nothing in order to censor its people, its media, the internet, the outside world, and not to mention the truth.  This type of government propaganda should be brought to proper light, because when coupled with government censorship, billions of Chinese are in danger of being grossly misinformed without any ability to determine the truth for themselves.

This entry was posted on July 12, 2011 by Tashi. It was filed under Free Tibet and was tagged with Beginning of the Great Revival, Censorship, China, Human Rights, Transformers.