After some considerable research on the subject of smartphones, I recently became among the first in Japan to own the Samsung Galaxy S2!  Released by Docomo in Japan on June 24th, 2011 and in my hands the same day, this phone is amazing to say the least!  It features a 4.3 inch Super AMOLED screen which is incredibly crisp.  The back of the phone has a 8 megapixel camera with an LED flash.  The phone takes great looking pictures and can also record HD 1080p video.  There is an additional front facing camera that is great for video calling with specific applications.  The Samsung Galaxy S2 runs Android 2.3 Gingerbread with a 1.2 GHz dual core processor.  This phone is fast, ultra slim and sets the bar very high as far as I’m concerned, it will be interesting to see how the iPhone 5 counters later this year!  I’d expect Apple to be a little concerned…  it’s quite possible the days of Apple holding back features on their products for future generation upgrades maybe over…  if Apple has any tricks up their sleeves this time, I’d suggest they not hold back, because the Galaxy S2 ain’t playin’.  Having initially launched in Europe and South Korea, and last month in Japan, the company has already sold a record 3 million phones in 55 days!  The U.S. launch is expected soon… 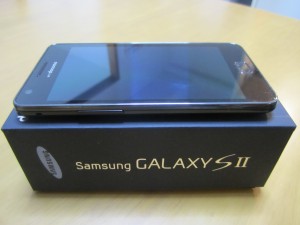 This entry was posted on July 4, 2011 by Tashi. It was filed under Product Reviews and was tagged with Apple, iPhone 5, Samsung Galaxy S2, Smart Phones, Smartphones.