Started by Ken Watanabe, Unite For Japan is an organization helping Japan with earthquake and tsunami relief efforts.  For more information visit http://www.uniteforjapan.org

The Ring of Fire

The Ring of Fire is an area where large numbers of earthquakes and volcanic eruptions occur in the basin of the Pacific Ocean.  In a 40,000 km (25,000 mi) horseshoe shape, it is associated with a nearly continuous series of oceanic trenches, volcanic arcs, and volcanic belts and/or plate movements.  The Ring of Fire has 452 volcanoes and is home to over 75% of the world’s active and dormant volcanoes.  About 90% of the world’s earthquakes and 80% of the world’s largest earthquakes occur along the Ring of Fire.  Ten percent of the world’s active volcanoes are found in Japan, which lies in a zone of extreme crustal instability.  Moreover, Japan dangerously lies at the intersection of four tectonic plates; the North American Plate, the Eurasian Plate, the Pacific Plate, and the Philippine Sea Plate.  These plates all meet on the island of Honshu, the largest of the many islands that comprise the country of Japan.  Thus the reason why the country is extremely vulnerable to earthquakes.  There are approximately 1,500 earthquakes recorded yearly in Japan, and magnitudes of four to six on the Richter scale are not uncommon.  Minor tremors occur almost daily in various parts of the country, causing slight shaking of buildings.  Unfortunately for me, even if I was still living in Seattle, Washington, the situation may not be any safer.  A message of caution to my friends and family living in the Pacific Northwest of the United States who are unaware, the Juan De Fuca subduction zone is the only significant fault line on the Ring of Fire NOT to have experienced a major earthquake in the last 50 years.  Please take precautions as natural disasters as in Japan can occur at a moment’s notice. 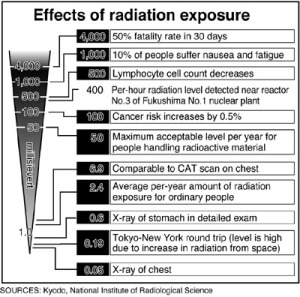 A short note to my friends and family, Tokushima has not been effected by the earthquake, tsunami, or any radiation and I am fine.  This blog is to provide a somewhat detailed chronological summary to what is occurring in Japan.  As many in the world are now aware of, on the morning of March 11th there was a massive 9.0 magnitude earthquake that hit off the eastern coast of Japan.  This is said to have been the largest earthquake in Japan’s recorded history.   The result of the earthquake triggered an incredible tsunami up to a record 38 meters high (124 feet) which devastated numerous towns beyond recognition.  In terms of where the earthquake occurred, the Tohoku region was the hardest hit.  Tohoku means northeast in Japanese, and includes Fukushima, Yamagata prefectures and Sendai City, the capital of Miyagi prefecture which was only 130 km (80 miles) east from the epicenter.  Tokyo, 373 km away from the epicenter also felt the lengthy quake and its many aftershocks that still continue.  Life has hardly returned to normal for the over 12 million living in Japan’s capital city as transportation remains inconsistent, and food and water has been limited.

Moreover, a second and serious nuclear power plant explosion occurred on March 15th at the Fukushima Nuclear Power Plant operated by a private company, the Tokyo Electric (Daichi) Power Company (TEPCO).  The explosion was followed by reported fires, which created an already apprehensive public to fear the spread of radiation.  The Japanese government has evacuated residents living up to 20 km from the plant and advised residents 30 km away not to go outside, or voluntarily evacuate themselves.  The U.S. Embassy in Japan is advising Americans living within an 80 km radius (50 miles) to evacuate the area and the State Department strongly urges U.S. citizens to defer travel to Japan at this time and those in Japan should consider departing.  On April 11th, the Japanese government expanded its current 20-kilometer evacuation zone around the nuclear power plant in Fukushima prefecture to include several additional highly radioactive hotspots.  On this same date one month after the initial earthquake, the Japanese government’s nuclear safety agency decided to raise the crisis level of the nuclear power plant accident from 5 to 7, the worst on the international scale.  Level 7 has formerly only been applied to the Chernobyl accident in the former Soviet Union in 1986, however, the volume of radiation released from the nuclear plant in Japan is one-tenth that of Chernobyl, according to the agency.  Japan’s chief cabinet secretary added, unlike the Chernobyl disaster, the Fukushima case has caused no direct health problems.  The International Atomic Energy Agency (IAEA) supported the Japanese government’s analysis by adding, in Chernobyl the reactor exploded while in operation, but in Fukushima the reactors stopped when the earthquake hit and the pressure vessels housing them did not blow up.  On March 18th, one week after the massive quake, the Japanese agency initially declared the Fukushima trouble a level 5 incident, the same as the accident at Three Mile Island in the United States in 1979.  Unfortunately, the situation has worsened, especially for Tohoku residents in Japan.  It is uncertain whether the nuclear plant is under control, if a major nuclear meltdown is eminent, or what the potential repercussions will be for the entire country.  To make matters worse, on March 15th one of the nuclear reactor containers was discovered to have been damaged, indicating that radioactive steam was spreading outside.  The government played down the extent of the initial damage and has been conscious not to over excite the public.  On March 16th, in an attempt to console and encourage the nation, Japan’s emperor gave an extraordinary nationally televised address telling the country to never give up hope and expressed he was deeply concerned and stated the situation is critical.  An inspiring address, however has fueled the public demand for more immediate answers regarding the true state of the situation from its government.  The monitoring of radiation levels in the surrounding cities continue, including in Tokyo where radiation levels have increased; however, not near the level of concern yet, according to the governor of Tokyo.  Despite these attempts to reassure the public, the nation is becoming increasingly worried.  Japan’s science ministry has finally begun publishing radiation levels monitored nationwide on its website, with the information also available in English, Korean and Chinese.  The ministry’s website (link) began showing the data on March 19th, with the prefectural information updated twice a day.

Despite an initial evacuation of 700 workers from the Fukushima Nuclear Power Plant where only 50 heroic workers stayed, there are now 180 plant workers at the site working to avert a nuclear catastrophe at the expense of their own health and lives.  On March END_OF_DOCUMENT_TOKEN_TO_BE_REPLACED