Recently I returned to Japan off a fun-filled vacation back to my hometown in Seattle, Washington!  Although there were many moments to share, I’ll start by highlighting a trip I made to watch the Seattle Sounders play.  The Seattle Sounders FC is Seattle’s local professional soccer team that competes in Major League Soccer (MLS).  The team was established on November 13, 2007, as an MLS expansion team making it the 15th team in the league.  Sounders FC home matches are played at CenturyLink Field, also home to the Seattle Seahawks, Seattle’s National Football League (NFL) team.  CenturyLink Field is widely recognized as one of the loudest stadiums in the world.  On September 15, 2003 during a Seattle Seahawks game against the San Francisco 49ers, Seattle fans broke the Guinness World Record for loudest crowd roar at an outdoor stadium with 136.6 decibels.  In addition, on August 25, 2013, the Sounders broke a new home field attendance record when 67,385 fans turned out to watch them play Pacific Northwest rival, the Portland Timbers.  In what feels like another lifetime ago, I once was involved in public relations for this stadium’s grand opening and I remember assisting in media tours in different stages of its completion.  More over, as a new Seahawks season ticket holder and attendee at the stadium’s inaugural opening in 2002, I have literally seen CenturyLink Field grow up from its concrete roots to the stadium it has become today.  From mild intrigue it garnered at its birth, through insufferable losing seasons it endured, to home of Superbowl Champions, and ultimately to one of the most respected home field advantageous in all sports!  I think it’s safe to say my concrete baby boys all growns up.. Here’s to you CenturyLink Field from someone who always believed in you!

For more information about events at CenturyLink Field: http://www.centurylinkfield.com/ 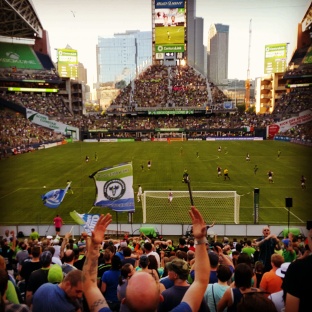 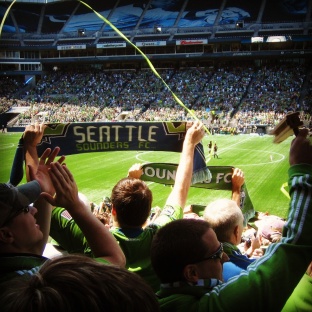 Note: For a link to all my pictures from Century Link Field see my Seattle Sounders One Drive album