Mt. Ranier National Park is an icon of Washington state’s landscape and a symbol of beauty accentuating the backdrop of Seattle’s skyline.  Ascending to 14,410 feet above sea level, it was established on March 2, 1899 as the fifth national park in the United States.  Mt. Ranier is an active volcano and is the most glaciated peak in the United States, spawning six major rivers.  With over 25 glaciers, the mountain is often shrouded in clouds that dump enormous amounts of rain and snow on the peak every year, which often makes it difficult to get that perfect picture when visiting.  Despite those odds, I was able to get a few nice shots as I spent one night camping in the park with friends!

Incidentally, Mt. Ranier has a sister-mountain relationship with Mt. Fuji, the most famous mountain in all of Japan.  More than a hundred years ago, many Japanese immigrated to Seattle, Washington.  It is written when they saw Mt. Rainier for the first time, they were amazed by the mountain’s shape and sacredness, which looked very similar to their beloved Mt. Fuji.  Therefore, they nicknamed Mt. Rainier “Tacoma-Fuji” for a long time with a feeling of nostalgia and respect.

In 1935, a National Park friendship started between the two countries, and on April 30, 1936 a sister-mountain relationship became official.  To commemorate the occasion they exchanged rocks from each other’s mountains.  The rock from Mt. Fuji has been displayed at the entrance of the Headquarters of Mt. Rainier National Park.  It was presented in a wood box made from the “sakura” or cherry tree, which is the unofficial Japanese national flower.  Likewise, the rock from Mt. Rainier is displayed at Mt. Fuji’s visitor center in Yamanashi, Japan. 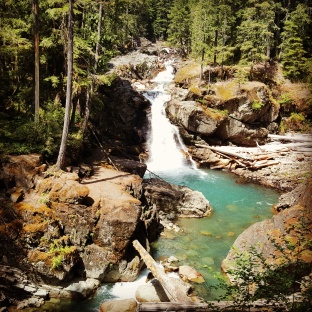 Note: For a link to all my pictures from Mt. Ranier National Park see my Mt. Ranier One Drive Album 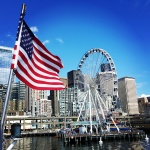 This entry was posted on August 18, 2015 by Tashi. It was filed under Travel and was tagged with Mt. Fuji, Mt. Ranier, Mt. Ranier National Park.