Recently I ran in the 63rd Anniversary Marugame International Half-Marathon in the small rural town of Marugame, Kagawa located 2-hours north of Tokushima.  With a population of 110,000 – Marugame hosts an annual marathon with over 7000 participants, including international running stars such as Kenya’s Mekubo Mogusu, Britain’s Mara Yamauchi, and myself from the United States.  Mogusu and Yamauchi won this year’s men’s and women’s division, respectively – and I followed about 90 minutes behind them in a time of 2 hours and 33 minutes.  After starting even with the Kenyan superstar, I quickly found myself trailing him, several senior citizens, and every tank top and short shorts wearing runner in the winter conditions.  Although I’ve run in several 10ks in the past, this was my first attempt at running 21km (13 miles) and after finishing it may be my last…  This was by far the most professional running event I’ve taken part in to date.  With the start and finish line beginning and ending at the local stadium, this event was extremely well organized.  Running along the streets of Marugame to the cheers of thousands of supporters and local Taiko drummers was a motivating feeling, every bit necessary in order to finish the full 21k…  Prior to the run, I had doubts whether I could finish the race within the 3-hour limit, but I’m happy to report "YES, I CAN!" – just barely… 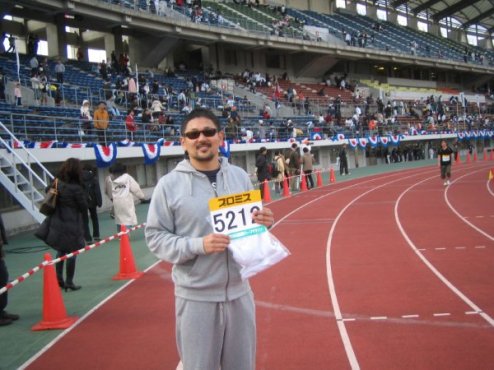 This entry was posted on February 2, 2009 by Tashi. It was filed under Sports Talk .